I will give you just a basic information about ‘THE ART MACHINEs MONDRIAN1/2/3’ as there is much information already published on various sites. Please start at ‘WUNDERKAMMERMUSIK’ and open this PDF: http://wunderkammermusik.files.wordpress.com/2012/01/mondrian_en.pdf

For German speaking visitors, you may read in addition this: http://wunderkammermusik.wordpress.com/m79/

Now, after reading the PDF, you know the history of ‘the 1st interactive art machine’ MONDRIAN1, designed by Prof. Herbert W. Franke in 1979. It runs on a TI 99/4 homecomputer. No mouse did exsit in these old days. 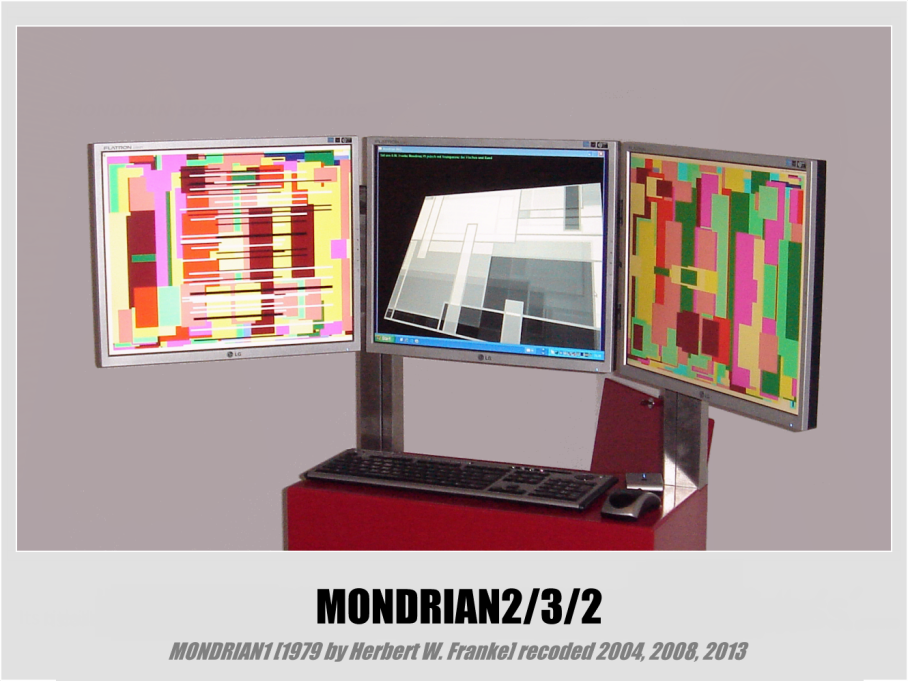 With the help of Andreas Hofmann, Konrad Kunze and Michael Janike I developed in 2006 ‘a keybot’ using LEGO Mindstorm to steer the MONDRIAN1/2 keyboard by a ‘2nd intelligence’. This means ‘a programmed robot‘ makes now the art. See a video on the keybot working here: http://marobic.com/ressourcen/downloads/key-bot.avi

Konrad Kunze asked me to work again in my lab in 2007, as he was about to complete his thesis on ‘pattern recognition by AI systems’, and coded the MONDRIAN3 art machine in two versions.  [I shall mention that Konrad was at these times also working in a club as DJ / VJ. I like it when my students can combine business, research and fun 🙂 ]

Version1 [C++ Direct X] is for Windows operating systems and has got an advanced ‘3D keyboard design’. MONDRIAN3 has the ablility to play ‘a Vernissage’. A MONDRIAN3-Vernissage is a sort of pre-defined visual performance. The artist can ‘overlay’ this by keystrokes and by mouse movements [3D ‘in space nagivation’]. This is the actual version for live performances. I had MONDRIAN3 Version1 on the Franke tour ‘Art Meets Science’ in 2007 in 10 cities in Europe: http://art-meets-science.info/ 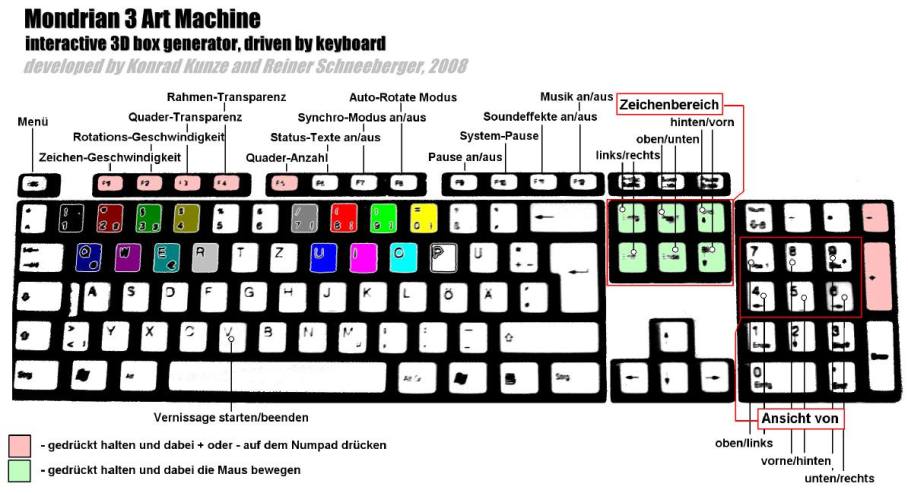 Version2 is a functional reduced Version1. It is based on Linden Scripting Language, so it runs in Second Life. In 2008 I had the first interactive art machine in Virtual worlds working and made some studies on it [list of publications available on request].

THE AGE OF TT [TECHNOLOGY TELEPATHY]:

MONDRIAN3 Version2 is now in a recoding by Daniel Jung. Daniel Jung, known in Virtual Worlds as Met Knelstrom and Art Eames, started in my lab in 2008. This project is his final one. It is expetected that he will have his thesis completed in late 2014.

This will be “in world” in a walkable environment [based on opensimulator technology] and the user(s) will wear “brain decoders” and they steer MONDRIAN3 by their Thoughts!

I set up the website TELEPHATICART – please read there if you have not been there ….

In case you dont believe that ‘Telepathy’ is working, watch this video link and share it to friends:
http://www.youtube.com/watch?v=f4DXiT6AOQA 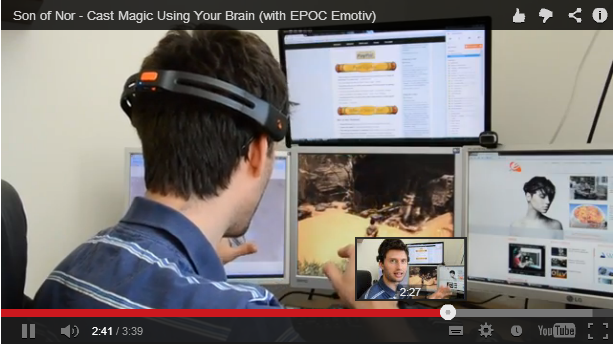 Wikipedia says about technopathy:  “Ability to manipulate technology. Manifested as a special form of electrical/telekinetic manipulation, a special form of “morphing” which allows physical interaction with machines, or even a psychic ability that allows for mental interface with computer data”

So you may call this art also ‘technopathic art”. And yes, we have some ROBOTs to bring the artworks to ‘The Volcano’ so the MONDRIAN fire may never run out of food 🙂 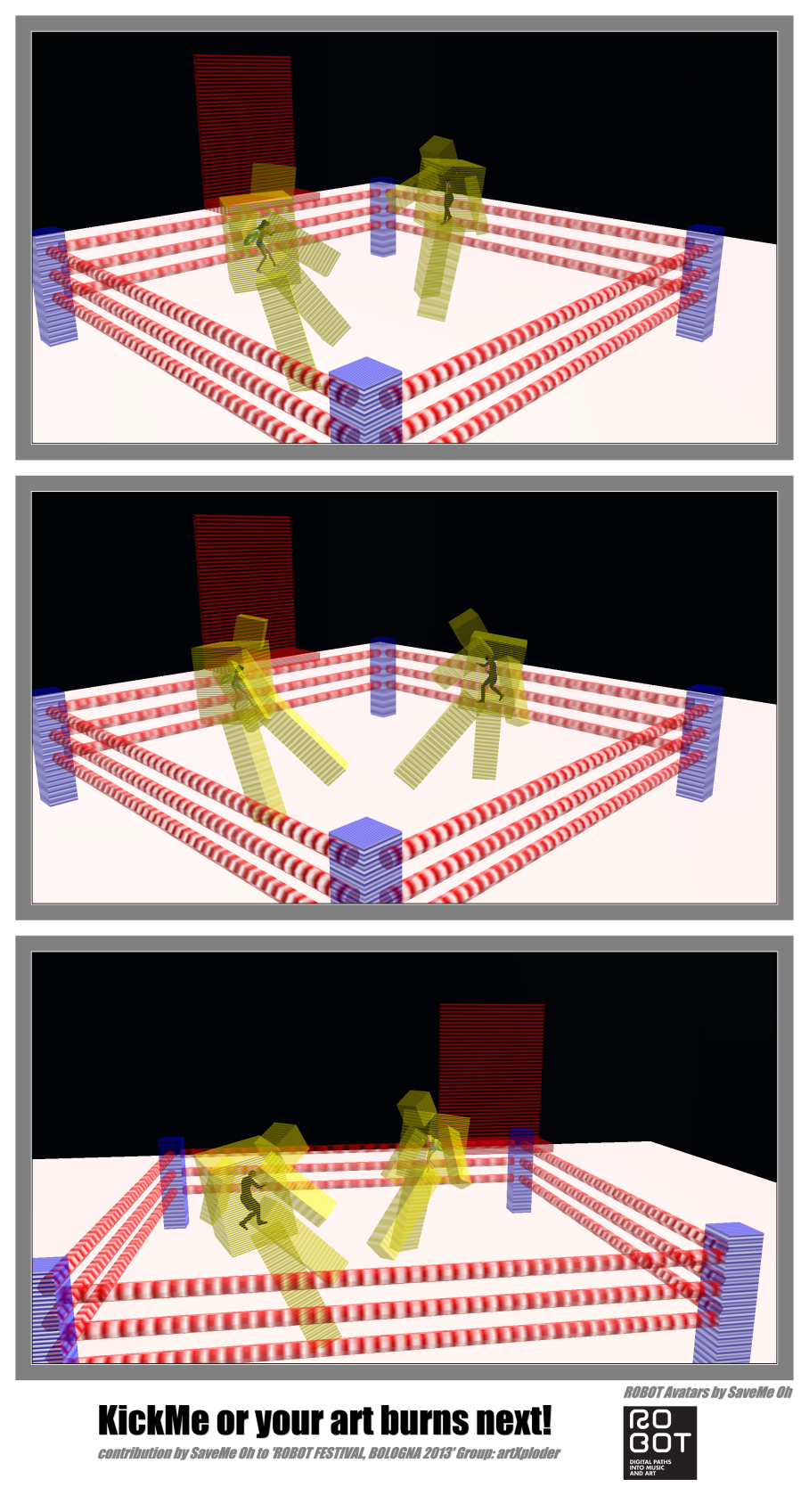 …  and there may be some visual effects, so it gets ‘a show’ After I have been there fighting for my life, ‘Lil Robot‘ came and Saved Me. He is of the cute one. He is in good care now for quite a time, so he mastered to kick the ‘agressor’ out. He promissed me to work hard at the Volcano. Of course he has his mission, given by his creator Feathers Boa. I have a page for Feathers Boa [-> linked], so the memory never will get lost over time. 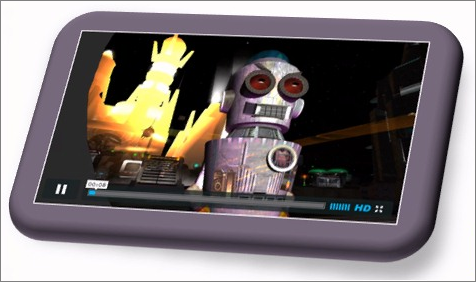 Some shouted to me: “You dont have full perm stuff of Feathers, noone has.” I have and will keep Lil Robot safe.

Just read at the linked page to get the full story.

Later on came his college ‘The Yellow Robot’ with the big bulb to look around if anything has to be repaired with his big hammer. There was no damage left as Lil Robot can work fast! The Yellow Robot is angry now: nothing left for him to do! 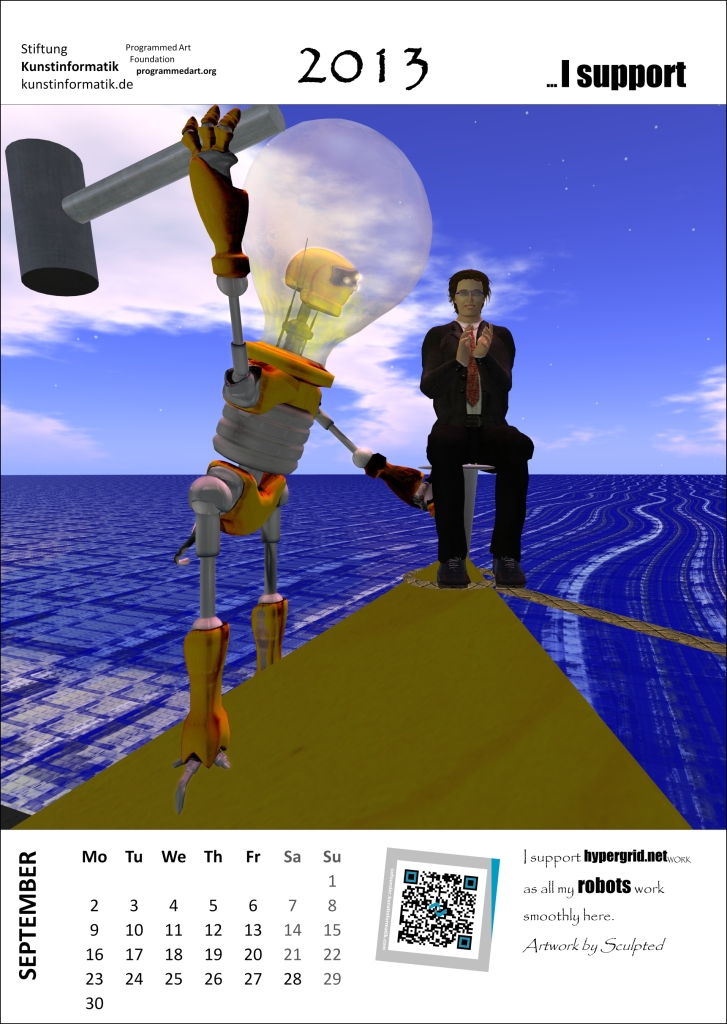 But, sorry, ‘The Yellow Robot’ has still no ticket to travel to ‘The Volcano’. I am working on this; who knows if he will get full permission to travel to ‘hypergrid.net’ to shorten the way to Italy:)

Maybe I can offter ‘the time machine‘ of Jules Verne in exchange? I use it on a daily basis to teleport. It is very reliable! 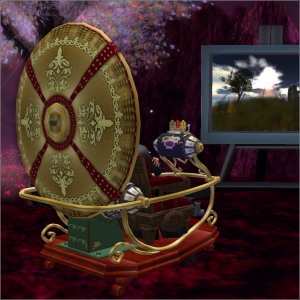